Galle, known as the city of Dutch and Portuguese colonizers and UNESCO World Heritage Site, is a small piece of Europe mixed with surrounding tropical paradise. With a maze of narrow streets, art galleries and antique shops, it is truly enchanting by its coziness, relaxing atmosphere, and luxury, thus being a great travel destination in the southwest of the island. A uniqueness of the city is highlighted with its outstanding combination of stunning ocean views from the Galle Fort which are the most admirable during the sunrises and sunsets, and architectural peculiarities of Dutch colonization period. As the waves crash at the walls of Dutch Fort and the nearby rocks scattered in the water by the coastline, the upcoming tides brings up a feeling of harmony and serenity.

Dutch Fort, the old city district encompassed by solid fortification walls, is the very heart of touristic experiences: Meera Mosque, Dutch Reformed Church, National Maritime Museum, as well as admirable Galle Lighthouse and Clock Tower – all of these most popular attractions are located within Dutch Fort in close vicinity from each other. Apart from that, Dutch Fort is itself forms a whole complex of old buildings left from Dutch colonizers, which makes it the city area highly fascinating to trace and explore. Outside Galle Fort, a deeper insight into local life can be enhanced by a visit to a row of small fish, vegetable, and spice markets, with its bustling surrounding streets and hurrying-up locals running their errands and making shopping. 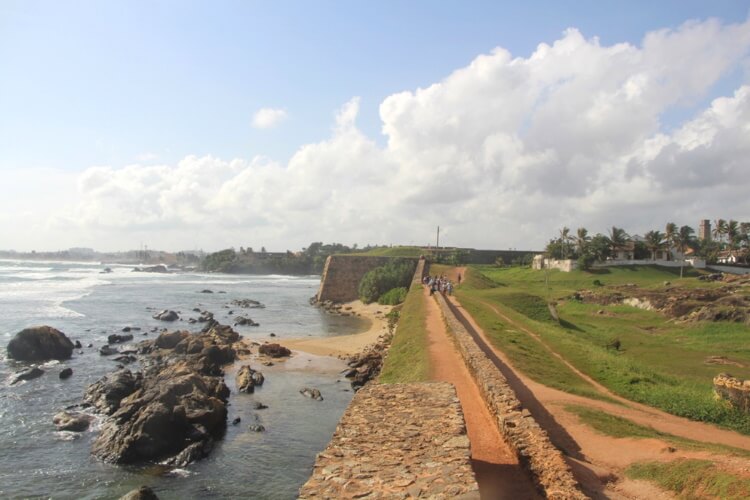 Galle Fort, outstanding and picturesque, greets the ocean waters by its ramparts, bathing its vast green spaces in the rays of a tropical sun since the year of 1588. Its geographically amusing lines of fortifications and a spacious area overlooking the sea and marking the end of the Galle city with its small colonial-style buildings makes Galle Fort an impressive sight which cannot be missed by any city guest. A space to gain the feeling of the colonial past, the area for having a pleasant and entertaining walk beholding the city surroundings, a sunset viewpoint to reconnect with the inner self and the nature – Galle Fort can empower all this range of diverse experiences. 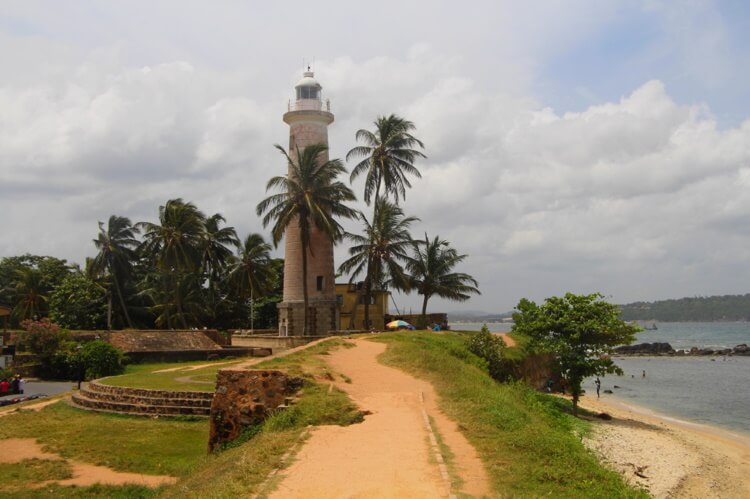 Galle Lighthouse, a white tall structure towering along with the palm trees by the Dutch Fort, is by far the most distinctive landmark of the city of Galle. With the vast area which opens up by the lighthouse, Galle lighthouse warmly welcomes the tourists and poses for picturesque photography shots with the background of the ambient and variable ocean. A zone by the Lighthouse is a great spot to have a rest in the shady nearby area of Lighthouse Beach.

Being located within the territory of Galle Fort, which is considered an old city center, the lighthouse verges with the water. Standing on the corner of the Galle Fort, it is connected with the Flag Rock Bastion by a wide promenade along the rampart and cliffy land ending up in the ocean waters.

Groote Kerk, otherwise called Dutch Reformed Church, is one of the oldest Protestant churches in the country. With its white façade and cruciform shape, stained glass windows and a large organ inside the church, the church stands as one of the major landmarks of the city of Galle. Dutch Reformed Church is located at the highest point of the entire Galle Fort overlooking its narrow streets. Apart from the building of a church, the street is dotted with a number of other fascinating and historically and culturally significant locations: a white tiled building of Galle library standing right beside the Church and the a towering Belfry standing in front of it next the entrance to the Galle maritime museum, as well as another church – all Saint’s Church – are all within a few steps one from another, forming together an assemblage of various sights to contemplate and visit.

Galle Clock Tower, the keeper of time since late 19th century, soars high above the other buildings, complementing the image of Galle as a city with the colonial legacy. A Tower within the Dutch Fort, Galle Clock closes up a vast promenade along the rampart by the coastline, unveiling a great view over the vast ocean space which is particularly spectacular in the rays of the rising or setting sun.

A stone-made building of Galle Clock Tower equals in its height a four-storey house. Rampart Street which the clock stands in winds around the entire Dutch Fort, inviting the city visitors into the maze of cozy narrow streets full of the remnants of colonial era and newly built colonial-style boutique hotels, as well as shopping galleries and cafes for the tourists’ liking.

The duality of both Dutch and Portuguese heritage can be visible in many other aspects: Galle, a city of thousand details, as if in a miniature scheme, should be closely observed and undoubtedly admired.

To export a reference to this paper please select a referencing style below: